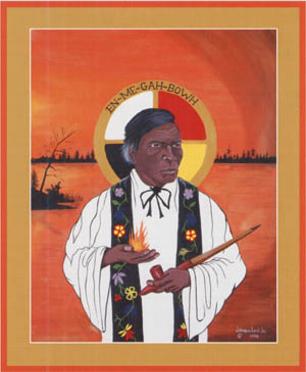 Today is the Feast Day of David Pendleton Oakerhater — also known as O-kuh-ha-tuh and Making Medicine — who was a Cheyenne warrior and spiritual leader. He later became an artist and Episcopal deacon. In 1985, Oakerhater was the first Native American Anglican to be designated by the Episcopal Church as a saint. This reflection by Bishop Steven Charleston — Episcopal bishop and Choctaw elder — seems a fitting reflection to celebrate his ministry and the gift of Native American spirituality in this time of polarization and division in our human family.

One of my ancestors’ fundamental principles was the spiritual obligation of hospitality. Any person who came to the door was to be greeted with food and drink. No one could be turned away. The reason for this was far more than superficial. Offering a stranger something to eat is a reminder that we all get hungry. Offering water is a reminder that we all get thirsty. In other words, we are all the same. Those reminders are more critical today than ever before. As our society splinters, the ancient wisdom of hospitality becomes a powerful symbol. It tells us to remember our common condition. It causes us to act in ways that defy the fear of difference. We learn to be strangers when we close the door on our humanity.

When we allow the tradition of Native America to speak to the darkness that surrounds us, we find a powerful new way to understand our situation. Without kinship, a nation is a nation in name only. It is a random collection of isolated people, all competing with each other, bound together by rules that often favor the few over the many. Consequently, the foundation for community is inherently unstable. The nation is always susceptible to struggle and injustice. It lacks a spiritual core.

Kinship provides that core, because kinship provides not conformity, but relationship — deep spiritual relationship. In the Native American context, this means every person’s right to be who they are and believe how they wish. It also means they are part of an intimate family relationship, grounded in sharing, cooperation, and mutual respect. It means being a nation without boundaries or hierarchies. It means being willing to take less so others may have more — not because it is the law but because it is love.

From “Ladder to the Light: An Indigenous Elder’s Meditations on Hope and Courage” by Steven Charleston; pgs 138-139